This is supposed to be a summary of guidelines addressing (web)development.
Especially if multiple team members are working on the same code – but also if one single developer wants to have clean reusable code throughout his application.

In the past some groups arose around that very same matter. Namely FIG and phptherightway.com.
Those ideas are almost completely valid and inherited below.
There are same major and minor issues with some ideas though that cannot be accepted in the form it has been made a modern "coding standard".

The language is English, both in function/variable names and in comments.

All code lines should be indented properly – this improves readability.
Use one tab as indent – good IDEs can transform them into (soft) spaces (as many as you find suitable).

This increases readability most of the time.
The other case I use ["] is inside query functions of the database object, where [‘] is needed to escape strings.

Note: The Cake Core usually puts spaces between . separated strings like $value . $value2 – you should do that this way, as well. In the past I did not always respect that, but I started to migrate my code according to the Cake conventions.

CamelCase: all the words have a capital – no whitespaces

camelBack: first word has a minuscule, all following ones have a capitel

snake_case: all lowercase and separated by an underscore

function: normal php function (for itself)

method: function INSIDE a class – usually the case in CakePHP

The { open bracket is in the same line of the function name (as shown below in the "function edit()").
Same goes for classes, if/else statements, while-loops etc.

Objects are in CamelCase (and should represent the class name):

Note: =& is not necessary anymore in PHP5 (automatically assigned by reference).

Also note: After a , [Comma] there’s usually a space.

Methods and variables usually are in camelBack:

Also note that methods must either be declared public or protected (never private). Same goes for class attributes.

Dont’ use magic numbers (like a literal 3) directly in the code. Try to use constants for them as they are more verbose and tell the developer right away what they stand for.

or (if UUIDs are used instead of AIIDs) with a char36 (char):

Same for the foreign keys.

The field names are lowercase – and multiple words separated through underscores:
"some_field_id" or "date_checkout"

Numeric fields (INT, TINYINT etc) can be "unsigned", if there won’t be any negative values, primary and foreign keys must be (they can never be negative).

Usabiltity:
I started to group certain tables.
In my opinion it can be quite a difficult task to keep track of the tables belonging together (especially with using HATBM naming rule "alphabetic order").
So I now group them by the logical "main" table. The main table will be the first word (singular! + [_]) of the other tables.

As you can see, here are two relations that have the same 2 tables, all of them can be found under "role…". If you would try to sort them the cake way, you would have a naming conflict as well as (in most cases) difficulties to find them due to different first letters (roles, xyz, ..).

The naming conflict results out of the convention to have to name both "roles_users".
Both tables have not that much to do which each other though, as the first one consists of the current roles-user-relation, the second one has some information about users applying to roles (with apply_date, approval_status (which could be -1 = dissapproved), approved_by (admin userid) and so on). But still, they all have the roles table in common. If you look for them it would not be "applications", "applications_roles" or "xyz", but "role_…).

It is more logical to always group them all under the main table – in this case under "snippets".
Otherwise you find the HATBM table for "xyzsnippets" under "tags_xyzsnippets" – but for "abcsnippets" it would be "abcsnippets_tags" – which (quite obvious) is not persuading at all.

All tags and attributes are lowercase.

All functions are camelBack.

All style attributes have to be lowercase:

both with lowercase characters (although classes are not case-sensitive, id’s are!),
the separator is minus [-]. You can use underscore [_] if it makes the separation of the identifier and the record id easier. E.g. "my-id_33". It will become necessary to do so if you use UUIDs (which contain minus chars).

Note: ids should be unique on the current page – so don’t use them for iterating elements. In general all styling should be class based. Ids are often abused for that. But
they usually serve the purpose of being identifiable via JS. So they should ideally be mainly used for dynamic JS stuff.

Do not name the fields after their style, but after the function/meaning – as the style can change and will result in things like ".red { color: yellow;}"

Use Inheritance. And – to avoid, that any added style for other pages affect the current one, declare the inheritance the following way:

Now, the .descr class on the td of this table does not get screwed up, if there is any other .descr in the stylesheets.

Especially inline-documentation is quite important. Not only for others, but also for yourself to be able to understand what you did some months/years ago.

All comments should in a clear way describe what is going on.

Use /* */ for longer comments and // Some comment for one-line comments (usually right above the code).
I recommend to always add a space after // as without that space it usually stands for some line of code commented out – which can lead to misunderstandings.

You should also comment all your methods/functions – take a look at the different tags available.

With a good php editor (like PHPDesigner 200x), you are able to use these method comments while programming (as it pops up on each method/function as soon as you click inside the brackets (even beyond the current page – as the editor looks through your complete app directory) 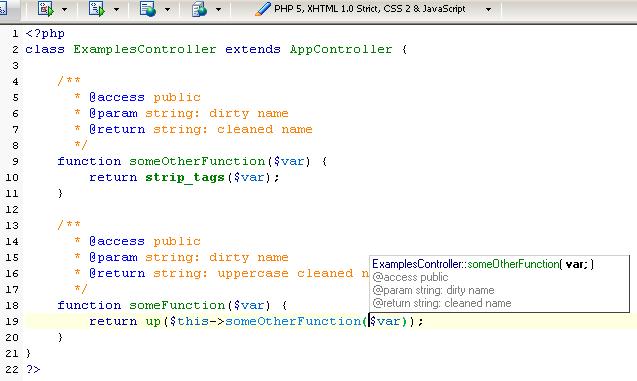 Use /* */ for comments (usually above the code).
Although // would be allowed as well – this is (as in PHP) usually code commented out.

In CSS documents there is just the /* */ to comment your code (usually above).
You should built some kind of hierarchy with them – if you have any.

Lets say we have a global css file (default site wide css) and another "specific controller" css file.
Then you could sort them like this (the action level is not really necessary, but shows what could be done):

Changes for PHP5.4 and/or CakePHP3.x

It seems the short open tags are becoming more popular in the view layer: <?= $somevar ?> is now considered valid PHP templating.
I am not yet sure if I would want to adopt this. But it might make sense for new PHP5.4+ projects – IF the view layer is clean enough to allow
such an approach without too many <? and <?php mixins. Because otherwise I would rather keep it consistent and verbose.

The PEAR Package contains some tips about "best practices".